hey - it's been too long since i last wrote on this blog. sorry about that. i guess school is very distracting this year. plus the play i was just in, which by the way was Rumors by Neil Simon. i played ernie. i'll try to get some photos from the show up soon. you will not recognize me. not only is my hair short, but it's parted on the side, gelled down, and i'm wearing glasses. hilarious...

anyway, i wanted to tell you all about my mom's new blog. it's called hipsterama, and you will love it. check it out here.

How I spent August 2nd - My Volunteer Day Project

in case you haven't heard, here's what happened:

see you next week!

dylan
Posted by dylan at 4:31 AM No comments:

i will be posting a video soon with the details of where my stand will be set up and what hours it will be open, but i wanted to let everyone know that for Volunteer Day on august 2 i am going to host an Alex's Lemonade Stand to help raise money to fight childhood cancers. if you don't know about alex or what Alex's Lemonade Stand is all about, click the logo above and it will take you to the website. so i made this vid about oreos and milk for the Oreo Moments contest. its episode 21 of Dylan's Couch, but since it was made for the contest it doesn't have the theme song or a blooper, since the contest had a limit of 3 minutes. it was fun to make that vid, especially since i messed up a few times and had to do the part where i eat the cookie over and over! mmmmm... oroes and milk are the greatest. on the comments to that video a lot of people said that they LOVED oreos with milk, but some people said they've never had oreos and milk together! WHAT?!? so sad! at least now they can try it and find out what they've been missing!

so its a contest, right... so if you go over to this page:

please VOTE for my vid. all ya gotta do is click the little "thumbs up" by my video. i think you can vote once a day until the contest ends. 8)

so yea - i gotta go eat some oreos

i know the rest of you are saying - how can i get into this playlist??? easy! send me your vids in support of Volunteer Day. you know you wanna...

you: what is this "volunteer day" that you speak of???

ttyl
dylan
Posted by dylan at 3:37 AM No comments: 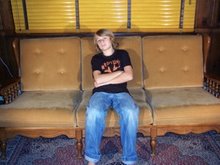